We contribute to the literature by demonstrating a "fork in the road" effect: i.e. showing that operating above maximum capacity corresponds to a 'trigger point' or decision point, whereby firms can either respond by investing massively in further growth, or by shrinking back to stay within current capacity utilization limits (Figure 1). 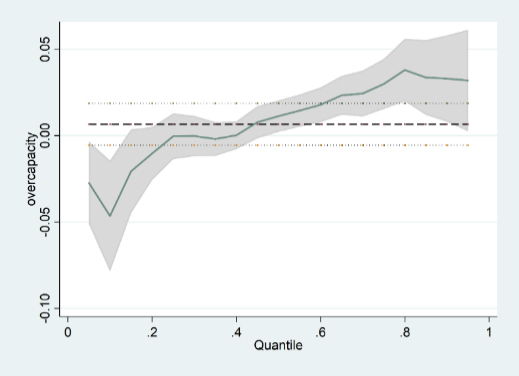 The challenge for policymakers, interested in supporting HGEs on the grounds of their impressive job creation potential, is to target their policy interventions to nudge firms into HGE episodes. The fundamental question for policymakers, therefore, is whether rapid growth can be triggered. If the 'trigger points' of rapid growth can be better understood, then policy interventions that are targeted at these trigger points could be a cost-effective way to 'nudge' hesitant firms that are at a critical decision point in their growth path to launch into rapid growth.

This study makes several novel contributions. First, amid a paucity of empirical evidence on firm-level capacity utilisation levels and their relationship to firm growth, we explore a rich large-scale questionnaire dataset that includes information on capacity utilisation levels. More specifically, we match the EIBIS survey (European Investment Bank Survey of Investment and Investment Finance) to the ORBIS database maintained by Bureau van Dijk. This dataset provides rich evidence that enables comparisons across many EU member states. Second, we develop a theory of firm growth and capacity utilisation, and formulate our novel 'fork in the road' hypothesis whereby firms operating above maximum capacity will either invest massively in subsequent growth, or shrink back to previous production levels. Third, we investigate the antecedents, characteristics, and consequences of operating above maximum capacity levels, focusing in particular on showing that entry into a state of overcapacity is preceded by rapid growth of sales and profits, and firms in overcapacity have higher employment growth before, during, and after being at overcapacity. This is consistent with firms being pushed into a critically high level of capacity utilisation by rising demand. Firms in a state of overcapacity tend to make incremental investments in capacity expansion for existing products, and modern machinery, rather than investing in R&D and new product development. We find some evidence that firms entering into overcapacity reach a decision point (or fork in the road), with some firms taking overcapacity as an opportunity to launch into subsequent sales growth, while for other firms overcapacity is linked to a decline in sales.

Considering the paucity of previous research in this area, we describe a relatively unfamiliar phenomenon using descriptive techniques in an exploratory way. A variety of techniques are applied. We begin with descriptive statistics, to investigate the characteristics of firms in our sample, the frequencies of firms in capacity utilisation categories, and to see how these frequencies vary across EU member states. Transition matrices show the dynamics of entry and exit from various capacity utilisation states. Time series plots show the dynamics of firms in the years before and after capacity utilisation states, for various indicators such as sales growth, profits growth and employment growth. Multivariate regressions can control for potentially-confounding background factors to provide a clearer view of the relationships between capacity utilisation and growth. In addition, quantile regressions (Koenker and Bassett, 1978) explore heterogeneous responses in terms of growth paths after overcapacity, allowing us in particular to evaluate the fork in the road hypothesis.